I’ve had a soft spot for The New York Daily News ever since New York City declared bankruptcy back in 1975. (I was 10 years old and thought that the city would literally cease to exist.

When the feds declined to bail out the city, The Daily News ran that famous headline: 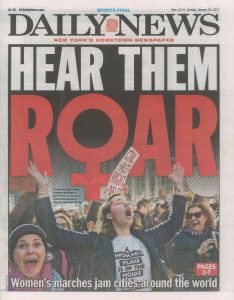 Here are photos of posters from Saturday’s protest marches around the world:
http://dumptrumpdumptrump.com/never-ending-protest-signs-womens-march-washington/

There were protests on every continent, including the South Pole.
That’s right: the penguins marched.

Here, in no particular order, are some of my favorite slogans from the NYC march.

America is not Trump’s locker room.

Without immigrants Trump would have no wives.

Too many protests to write them down.

Psychoanalysts for sanity in the White House.

My pussy is not up for grabs.

When was America ever great for people of color?

Tyrannical, repulsive, unhinged.
We are the granddaughters of the witches you failed to burn.

Cross your legs, America, we just hired a sexual predator.

The Donald has no clothes.

Keep GOP out of OPP*.

(* OPP, our group learned, is millennial-speak for Other People’s Privates. And here I thought it was some kind of health insurance plan.)

Insane clown not my President.

You ain’t seen nasty yet.

Not crowning a king or bowing down to a dictator.Yesterday our new employee started his new temp job.

Resistance is not futile.

Don’t get me started.

and another one, clearly a product of google translate gone sadly awry.

It was trying to say, “Make America great again”

and failing, because (few people know this!) grammar is the Russians’ secret weapon,

and google translate simply cannot cope. The result was bizarre and grating.

“We Shall Overcom’,”
pealed the bells of Saint Tom
(Saint Thomas Episcopal church)
as we passed 53rd and Fifth.

A little further up on Fifth, a saxophonist played “This Land is My Land, This Land is Your Land.” Marchers burst into song. I looked for a sign on the sax that said “This machine kills fascists.”

Although it was one day post-inauguration, the march in NYC was a strangely joyous affair. In the moment, I had no idea just how big it was and thought my fellow marchers who were exulting in the numbers were getting carried away. But, hey, I couldn’t see over anyone’s shoulder. (See photo below; I think that in the age of Facebook and Instagram, circulating this photo hardly counts as self-promotion.) And it turned out those who were exulting were not exaggerating. The march overflowed its banks, so at times we found ourselves on side streets with few people, which fueled my skepticism. But at those moments we were in fact in the shallows of the flood plain. When we emerged on 42nd Street and again at Fifth Avenue, the roiling current of people was broad and deep and we were swept along like twigs in a flood.

This photo was taken by professional photographer and filmmaker Ilene Cutler, one of many who saw our spiffy red signs (thank you, Barbara!) and asked to take our picture. Smiling broadly in the pink pussy hat, behind the rental wheelchair, which for hours and hours she stalwartly pushed, with me in it, up hill and down dale, over pothole, grill, subway gap, speed bump and curb cut (and just plain curb, and even pushed it up and down subway stairs–for which I stood up, temporarily vacating the chair) is my sister Anne. Thank you, Anne, for taking the physical strain on yourself, enabling me to participate despite incapacitating shortness of breath. Next to Anne and behind her, other members of our group, Margo and Mimi. 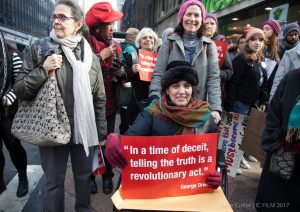 On Friday evening, well after COB on the very eve of the march,
a mass email went out from my employer’s Ethics Office.
(Most of you know that I work in east midtown Manhattan
at a large international organization
that employs a lot of translators.) The email reminded
staff that as international civil servants we should comport ourselves
appropriately, maintain neutrality, not take political stands, march or sign petitions…

As one of my fellow marchers said, they couldn’t have been too serious about
it, sending it out as late as they did.
I saw it only
because a fellow functionary and friend who was working late
forwarded it to my personal email
with the subject heading:
“Get a load of this, er, crap.”
To which I replied: “I will proceed as if I never saw this.”

In any case, this was too important to sit out. And I believe that the purposes and
principles of this march and of all related actions that will surely follow
are fully in compliance with those set forth in the Charter of the Organization in Question
and all relevant
international interventions, conventions, covenants,
agreements, accords,
treaties, entreaties,
instruments, documents,
pacts and protocols
thereto.

This march is only the beginning, of course. But it shows how much support
there is for further steps.

And speaking of that, this Tuesday at noon,
there are rallies at Senators’ home district offices to protest
Trump’s cabinet appointments. Type in your zip code at this link to find the rally near you.