I didn’t go on a trip, as some of you thought, nor is writing these Alerts terribly time-consuming or difficult, as some of you sympathetically suggested. (The hardest part is keying in all of the addresses. There. Now I’ve revealed my technological backwardness.) And writing them serves to justify all the time I spend reading the press anyway.

Nope, none of the above.

I just ran out of ideas. Stuff stopped welling up. This is why I cribbed from the French and Russian press the past few weeks. Translation has always served as a convenient barrier to hide behind when I myself have nothing to say. And I can always fall back on it again in these Alerts during dry periods, I suppose, although now the secret is out and you’ll know why I’m doing it. But yes, the Russian press, especially, promises to remain relevant to our domestic situation for a good long while, in ways both peculiar and outlandish.

(Okay, so maybe these Alerts won’t be as frequent or regular as before. Or maybe they will. That’s all I’m committing to for now.)

-Sessions perjured himself.
(I love that this verb is both transitive and reflexive–perjured himself sounds perverse, doesn’t it? Well, I guess it is—and I have gleefully used it, again and again, in phone calls this past week to the offices of Senators and Congresspeople.)
-Trump has launched an evidence-free accusation against President Obama, saying that President O. ordered a wiretap of him during the campaign.
-There is a new Muslim ban.
-There is a new so-called health care plan.

Can anyone possibly keep up? One of the two things I learned in journalism school is that publications that come out on a less-than-daily basis should not attempt to keep up with the breaking news, but instead run content that has a fairly long shelf life.

So, another topic that also promises to remain timely longer than anyone might wish:

Sunday, my friend Amy and I went to a silent (well, kinda silent) vigil at Grand Central Station, which takes place on Sundays whenever hate incidents have occurred in New York City during the previous week.

In this case, those incidents included desecration of five tombstones in a historic Jewish cemetery in Brooklyn; a swastika scratched into the door of the Universalist Church in Manhattan, whose congregation recently voted unanimously to serve as a sanctuary space for undocumented immigrants and which has participated in social justice movements, including Black Lives Matter; and bomb threats targeting three Jewish community centers in Staten Island. These vigils, along with many, many other actions, are organized by a group formed after the election called Get Organized Brooklyn, based at the Congregation Beth Elohim in Park Slope, whose rabbi is the remarkable Rachel Timoner, SJW (social justice warrior).

At the vigil, participants (I counted just over 90, including babes-in-arms and also in strollers) formed a large circle around the clock and information booth in the center of that vast space, where we stood with minimal chatting from 3 in the afternoon until 4. As it began, someone thrust into my hands a poster that said “Not in Our City,” which Amy and I each held up by a corner as we stood in the circle.

My writing hand always gets itchy when I see slogans at a demonstration: I need to record them for posterity. (I first learned this about myself at the Greenham Common Women’s Peace Camp, back in 1984, and relearned it during Occupy Wall Street.) So I gave Amy custody of the whole poster while I took a stroll around and made notes:

Stand Against Hate
First They Came for the Pre-Schoolers?!

We Are All Connected

Justice, Justice Shall You Pursue (and the same, I think, in Hebrew), Deuteronomy, 16:20

Trump is a Schmendrick  [https://en.wikipedia.org/wiki/Schmendrick]

Everyone is Welcome Here; Hate is Not

You Shall Not Wrong a Stranger, For You Were Strangers in the Land of Egypt, Exodus 22:21

Hate Has No Home Here

We Will Love and Protect Each Other

Overcome Oppression Love for All

Keep JCC Safe; I Play There [held by a toddler]

New Yorkers Say No! to Hatred

It’s a Matter of Human Decency

Stand Up Against Anti-Semitism and Islamophobia

All You Need is Love

Injustice Anywhere is a Threat to Justice Everywhere   MLK

For Evil to Succeed, All it Needs is for Good Men and Women to Remain Silent  MLK

Hate is Not a New York Value

Many passersby stopped to express their support and thanks for the action; many took pictures.

One young man did the entire circuit, stopping to thank and shake the hand of every single participant.

A young mother explained the vigil to her toddler this way: 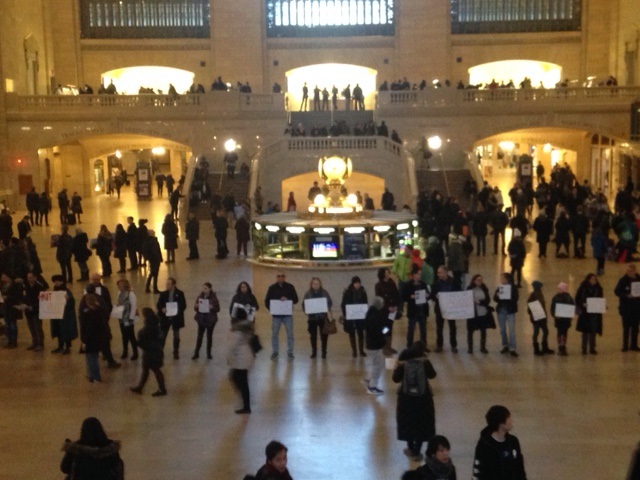 To see back alerts, visit lauraestherwolfson.com/alerts

← Alert #24: La Belle France
Alert #26: A Virtual Museum of Ephemera from the Resistance →