Material evidence of the anti-Trump resistance has been flooding in. When there were just two pages, they went on the refrigerator with a magnet (part 1). As the volume increased, the stuff went into a file folder (part 2). Then it started spilling over into my little living space (parts 3-5).

Part 1 consists of the following:

Part 2 consists of the following:

[Note: Schumer’s office is a mere three blocks from my place of work, and these Tuesday Resistance demos are held at lunch hour, so I have no excuse to stay away. An example of no-fuss resistance.]

When I mentioned my Alerts, she asked what organization I’m with. When I said there was no organization involved, she looked puzzled, making me wonder if I should come up with a name, print off some letterhead and business cards and get myself a post office box.

(Adventures in Activism: During the meeting, there were sounds emanating from the depths of the apartment that called to mind children shrieking. The hostess/organizer appeared unperturbed. When she noticed attendees exchanging concerned glances, she said with a wave of her hand, “Oh, those are the parrots.”)

Part 3 consists of a photo of protest buttons that my sister Anne has ordered in batches of one hundred. She’s been handing them out, including to a man she encountered on the 2 or the 3 train last week (uptown, just north of 42nd Street), who, it shouldn’t be a total loss, was using his commute to knit a pink pussy hat. (Knitting Advisory: he told her that pink yarn has become hard to find.) For his sake and the sake of other subway riders sitting nearby, let’s hope the ride was a smooth one. 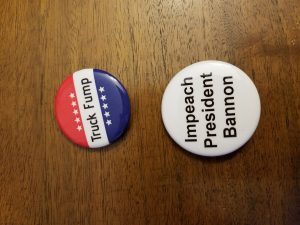 Write to me if you would like buttons sent to you free of charge. Please indicate which one(s) you want and quantities for each one.

Part 4 is a photograph of the poster given to me at the Grand Central vigil covered in Alert # 25. 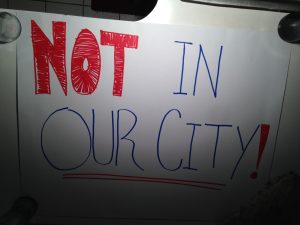 Part 5 is a photograph of the poster I had made for the Women’s March (see Alert # 20). The slogan is pretty all-purpose, so I expect to get a fair amount of use out of it. 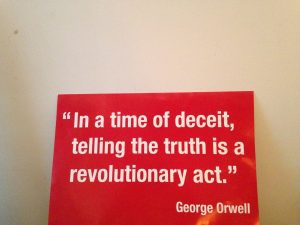 Please send photos and explanations/descriptions of your memorabilia for possible future Alerts.