After James Comey’s testimony the other week, some commentators noted the similarities between Trump’s treatment of Comey (luring him into one-on-one meetings, appealing to his loyalty, calling for complicity) and Comey’s reaction (embarrassment, shame, reluctance to call him out) and the way that sexual harassers and abusers treat their targets: 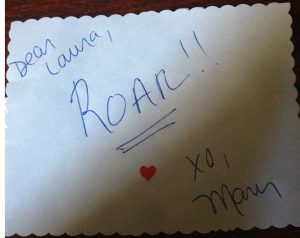 Which puts me in mind, once again, of pink pussy hats.

About two months ago, when the weather was still wintry, I saw a woman in Grand Central at rush hour wearing a pink pussy hat. As I knew that the hats had become very difficult to find, and that pink yarn was even harder to obtain, I complimented her on her vivid headgear and asked where she’d managed to find it.

“I made it,” she said, and offered to make one for me, explaining that there were eight other people ahead of me in the queue, but that she would eventually get to me. I gave her my email address, and when I asked about compensation, she said simply that I should donate to a good cause.

This encounter receded in my mind, behind a welter of others, until last week, when my knitting friend  (whose name is Mary) wrote to ask my mailing address. A package arrived containing two (!) perfectly shaped, vivid pink hats with nary a dropped stitch. Give the other one away, she told me by email. And enclosed a handwritten note with a single word (attached). 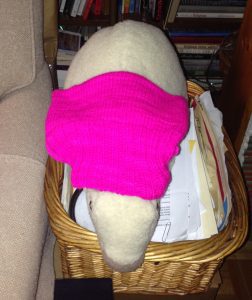 Mary first learned to knit from her grandmother, she told me, who was an immigrant from Poland. She couldn’t go to the Women’s March, but made 20 hats pre-March, all of which were worn by 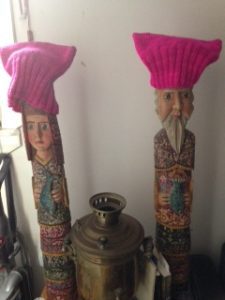 marchers, mostly friends and family. One came out way too large, and was given to an unknown young man with a very full head of braids. Mary continues to make the hats, now totaling 48. She initially made them for anyone who commented on hers (which she wears to work every day, she wrote yesterday, so apparently even in 80-degree weather) but now, in an effort to scale back, she makes them only for people who ask where they can get one. So that, friends, is the magic password.

I sent Mary photos of her creations, also attached. In the first one, the wearers are Wolfson heirloom statues King Charles and Queen Beatrice of Provence and Sicily (circa 1250) (flanking our heirloom samovar). In the second, the hat is being modeled by a stuffed polar bear, given to me years ago by a friend who brought it back from Warsaw. The third photo is of yours truly.

My random encounter with Mary the Knitter reminds me of item 11 in historian Tim Snyder’s advice, widely circulated after the election, entitled 20 Lessons from the 20th Century on How To Survive in Trump’s America: 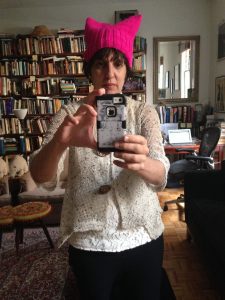 11. Make eye contact and small talk. This is not just polite. It is a way to stay in touch with your surroundings, break down unnecessary social barriers, and come to understand whom you should and should not trust. If we enter a culture of denunciation, you will want to know the psychological landscape of your daily life.

And incidentally, he now has a book, entitled On Tyranny: Twenty Lessons from the Twentieth Century. Please purchase it anywhere but Amazon, which, inter alia, still sells Trump “Make America Great Again,” “Adorable Deplorable” t-shirts and Trump Republican crew socks, and should be resolutely boycotted as long as it enables his violation of the emoluments clause.

And keep on talking to strangers.

Warm Regards to All,

PPS Go here for a history of feminist craftivism, all the way back to when Penelope secretly undid her weaving to avoid marrying her loutish suitors while waiting for Ulysses to return:

← Alert #26: A Virtual Museum of Ephemera from the Resistance